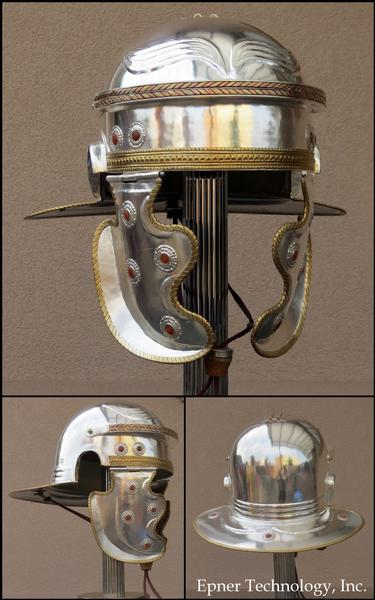 The original iron helmet that this replica (pictured) is based on, was lost in the Rhine River, Germany, around the mid 1st Century AD. It was later discovered in the 1800s by Dr. Ludwig Lindenschimt who wrote the most comprehensive report on this helmet to date. The helmet was then placed in the Mainz Museum, Germany, which was hit by a bomb in WWII. The helmet was consequently destroyed and all that remains of the original helmet is one cheek-piece, the brow decoration, and two silver rosettes. The surviving cheek-piece originally found on the helmet by Lindenschimt was a replacement piece, since the original was destroyed due to battle damage 2000 years earlier. We do not know if the Romans gave their helmets specific names but we know they called their helmets Galea (helmets).

In the 1970s, Sir Russell Robinson wrote a book in which he classified Roman helmets based on the evolution of certain features present on the helmets. He too found what remained of this helmet along with some original photographs of the helmet prior to its destruction. He proceeded to classify the helmet as Imperial Gallic D. Again, this is a modern description.

In 2007, Alfredo Mellace* commissioned this helmet to be reconstructed by Master Armorer Brian Stobbs, in the north of England. He obtained a copy of the original report and photographs and proceeded to reconstruct the helmet using the metals and techniques as used by the Ancient Romans to realize this goal (the metals and techniques used as close as possible to the original materials and methods of manufacture).

It is known that the Romans applied silver sheet to iron helmets enhancing their appearance and also to protect them from corrosion. This is true especially for helmets owned by legionary officers such as centurions. The original Gallic D helmet when found did not have any residual silvering (an original officer helmet from former Yugoslavia, is known to have been silvered and contained features identifiable to a legionary centurion). However, there are certain structural details of the Gallic D suggesting that it possibly was an officer’s helmet of the centurion type. To this end and based on the other officer helmets silvering evidence, Alfredo Mellace commissioned their helmet to be silvered in 2012 by Epner Technology, Inc. to simulate the silver appearance without having to dismantle the entire helmet and apply silver sheet.

Subsequently, the pictures taken here by Mr. Michael Chaira, of Liquid Dreams Design, show what appearance the original helmet could’ve been on the day of manufacture 2000 years earlier.