The product that changed the direction of Epner Technology’s future; the fusing reflector (right) for the Xerox Model 3100 copier. This aluminum extrusion was polished; nickel and gold plated, eventually on the functional surfaces only, and became the beta site product for our future infrared plating experience. More than a million were produced at Epner.

Our first experience exhibiting at a trade show was in 1972, at The Design Engineering Show at McCormick Place in Chicago. A draftsman from Xerox stopped at our booth and admired all the gold plated stuff and an aluminum part caught his eye. He said Xerox was having a problem with adhesion of nickel and gold at 500F. The part was the fusing reflector for a new line of copiers and this part was the “gating” item for the program.

I left the booth in the hands of a colleague and flew directly to Rochester to meet with the engineer whose name he had given me. The Xerox engineers gave me an extruded aluminum sample to plate. 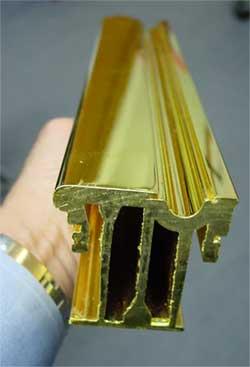 I returned a week later and proudly presented the part. I was ushered into a darkened room with four engineers. They mounted the extrusion in a holder on the side of a machine I had never seen before but the marking read, Beckman DK 2A. This I learned was a spectrophotometer with an integrating sphere and thus could measure the total reflective efficiency. Specular combined with diffuse. They were measuring at a wavelength of 700 nm, and the reflectivity came up on the digital readout at 94%. Their jaws dropped. They tried not to look impressed, but they failed. I too, could hardly hide my excitement at their excitement even though I didn’t know what I was looking at.

They sent me back to New York with 20 more samples, but I could have flown without a plane. Two weeks later, we repeated the routine. Only this time the reflectivity barely reached 91%! The lead engineer freaked. He said, “I put you on the drawing at 91% to give you a 3% cushion. Now I’ve got to drop it to 88%” What happened to the 94%?”

I tap-danced. I didn’t know how we got 94% in the first place, but of course I assured him that we would maintain the 91% and surely would get back to the higher reflectivity as “soon as our lab figured it out”. But the parts didn’t blister in the heat test so we were off and running with a 500 piece pre-production order.

We delivered the first production parts of some of the most beautiful gold plating we had ever done. They were all rejected. Low reflectivity! It was evident that the human eye made a very poor IR spectrophotometer. Indeed, in the infrared, gold is not gold, is not gold.

It was immediately clear that if we didn’t have the same measuring instrument that Xerox used, the game was over. They agreed and tooled us with the identical set up. With the new “eyes” that our in-house Beckman gave us, we were able, over some two years of production, to get back to 94% at 700nm. Today, we guarantee 97% at 700nm! And recently, that aging DK2A was joined by a Perkin-Elmer Lambda 9, of course, with an integrating sphere.