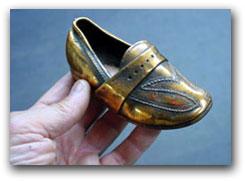 Epner Technology, Inc. is a high-tech engineering and specification plating company. Its Laser Gold infrared reflective coating is world renowned and has been the NIST standard for some 20 years. Plating difficult metal substrates such as molybdenum, titanium and beryllium, and the plating of the engineering plastics such as Ultem, Teflon Torlon and Ryton, are a specialty of this hundred-year-old plating shop.

The company was founded in 1910, and is still under third generation family management. Its first encounter with high-tech plating came in 1938 when Cohan-Epner, named after the founding partners, was asked to silver plate some of the earliest microwave RADAR systems for The Columbia (University) Radiation Labs.

Epner’s infrared experience began in 1972 with a Xerox contract for high volume copier reflectors. A truck-load of rejects for low reflectivity led to the purchase of an infrared spectrophotometer. The lesson; what appeared to be truly beautiful gold plating to the eye, fell far short of the Xerox IR reflectivity specification.

In the mid 1970’s, the company was reorganized as a smaller firm concentrating on high tech projects including the plating of difficult substrates such as molybdenum and titanium, and plating on engineering plastics like Duroid, Teflon and Ultem. And of course, Laser Gold and Laser Black for the optics community. In 1985, the name was changed to Epner Technology.

Today, the company consists of some forty dedicated employees that include three chemical engineers and one PhD chemist in the Laboratory; some 130 combined years of plating know-how in those four people alone.

The facility is housed in a, sprinkler equipped, 15,000 square foot brick building in the Greenpoint section of Brooklyn, less than 10 minutes from LaGuardia Airport. In 1999, a new $70,000 Process Control Laboratory was installed as the second part of a 5-year rebuilding program. Sales and Administration occupy part of a company-owned 40,000 square-foot building nearby.

“Your Contribution has been invaluable and we could not have accomplished our goal without you.”

“The plating job was head and shoulders above what has been done for aircraft instruments here in the past…the performance of the vessels gave us nearly double the sensitivity, due in part to the extremely high reflectivity of your finish…”

“While some might consider it just ‘doing their job,’ we know it took great flexibility, dedication, and desire as Epner employees to meet, even exceed, customer requests…”

“The performance of the Epner sample was outstanding, providing a Q of approximately 3700 as opposed to the best previous value of 3200 (typical production values are around 2800).”