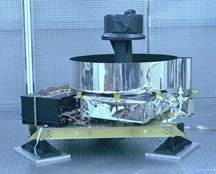 MOLA, the Mars Orbiter Laser Altimeter, is an instrument on the Mars Global Surveyor spacecraft. It collected altimetry data about the height of surface features on Mars until June 30, 2001.

NASA launched the Mars Global Surveyor toward the end of 1996. It went into orbit around Mars  almost a year later with a half meter in diameter beryllium mirror coated with our unique Laser Gold aboard as part of The Mars Orbiter Laser Altimeter  (MOLA).

This mission and the function of the gold coated MOLA mirror, is best described in NASA’s own words:

“Starting in March, 1998, Mars Global Surveyor (MGS) started making pole-to-pole observations of the planet. Its goal is to map the entire Martian globe, laying the foundation for 10 more years of NASA missions. Global Surveyor’s role was to determine the geology and perhaps the past history of Mars and its climate. It is designed to compile global maps of Mars and collect data on its atmosphere, surface composition, interior and evolution.

The altitude determination process used by MOLA works by measuring the time that a pulse of light takes to leave the spacecraft, reflect off of the surface of Mars, and return to MOLA’s collecting mirror. By multiplying the reflection time by the speed of light, scientists can calculate Surveyor’s altitude above the local terrain to within 30 meters (98 feet) or better.

As the spacecraft flies above hills, valleys, craters, and other surface features, its altitude above the ground constantly changes. A combination of MOLA data with images from the camera will allow scientists to construct a detailed topographical atlas of the planet. Such maps will help in the understanding of the geological forces that shaped Mars.“

The performance of Laser Gold on the MOLA mirror had NASA insist we do the same on a mirror twice the size and valued at a million dollars, for which we had no equipment. My next blog will describe how our conflict with NASA was resolved.