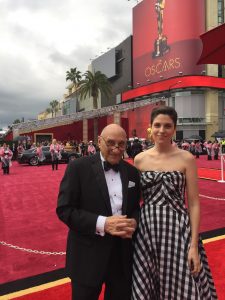 Relax, She is my Cousin 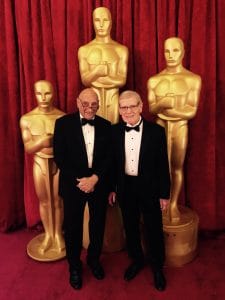 David Epner and Dick Polich at the Oscars

Many of you know that we applied Laser Gold, our rugged 24 Karat gold plating process to all the Oscar statuettes again this year. Thanks to that effort I was able to secure a pair or seats to the Award Ceremony and my “date” was my beautiful second cousin Milena Pastreich who Lives in LA and is making a documentary film called, “Pigeon Kings”.

Upon arrival at the Dolby Theater, a valet took my rental car and as we approached the “Red Carpet” we became aware that there are two Red Carpets. Those of us who were not part of any of the nominated films , were directed to a parallel carpet separated by a velvet rope and stone-faced men-in-tuxedos spaced about every six feet. They all had Secret Service-like ear microphones.

The real, almost palpable excitement of the evening took place in those few moments that we could dawdle on “our” red carpet. It was a wild scene indeed. On our left were the screaming crowds in the bleachers, and on our right, the flashbulb-popping TV-interviewing madness taking place on the celebrity carpet.

Amidst this mayhem, I spotted Dick Polich, the owner of Polich Tallix, the world-renowned art foundry that cast the statuette in bronze before it came to Brooklyn for the for the final gold finish. Dick was chatting with Scott Miller, a Managing Director at the Academy, whom I had met previously when he had visited our plating shop.

My jaw dropped when Scott told me that more than 9000 people had some part in putting this evening together. And by now we all know what an evening it was!
Our seats were in the second mezzanine and perfect for watching the show since the TV screens were at our eye level. The folks on the orchestra level have the stiff necks.

My thanks go to Scott Miller and the Academy for a truly unforgettable evening!

2 thoughts on “My Night at the Oscars”