For the first time in 30 years this year’s Oscar was produced by a new team. The Motion Picture Academy has selected the brilliance and durability of Epner Technology’s Laser Gold electroplating process to “dress” the 2016 Oscar. No longer made of ”pot metal” which is mostly tin, these Oscars were cast in solid bronze by the renowned art foundry, Polich Tallix.

This change was precipitated by two facts. The first was the desire to return the Oscar to its art-object roots; a bronze casting with more detail. The second is an attempt to stem the steady flow of Oscars that had been awarded in years past, being returned because of worn gold plating. 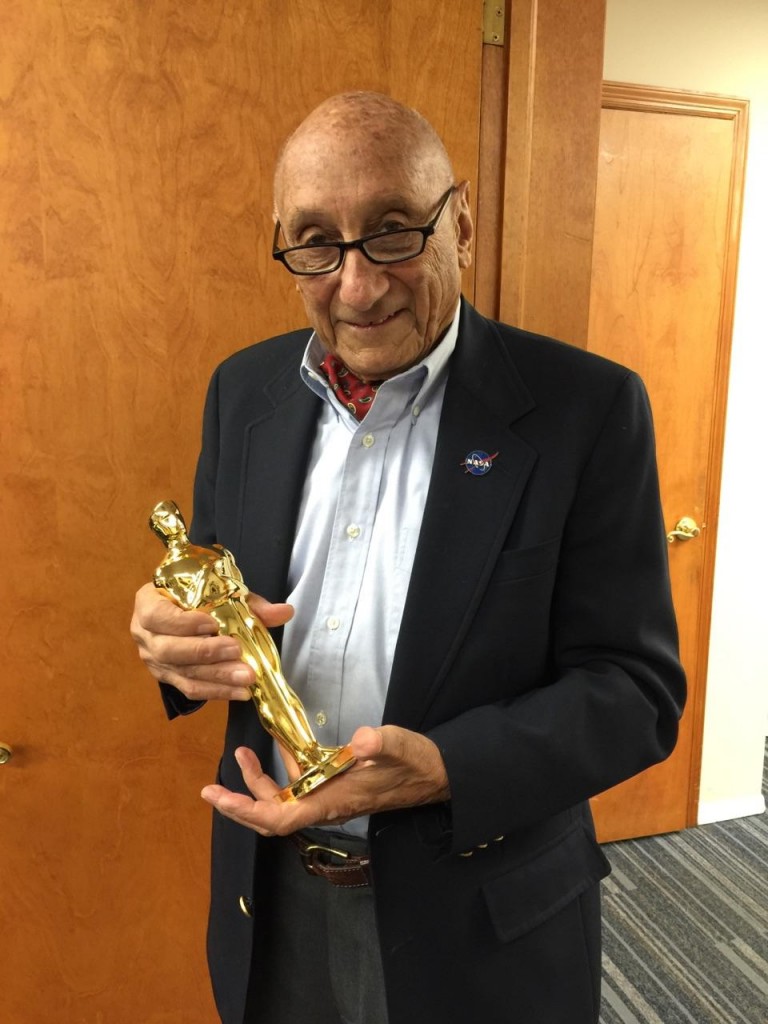 Epner Technology’s Laser Gold is going to the Oscars

The Oscar Statuette has come to Brooklyn to get dressed in Laser Gold for his big night this weekend.

Here is how it happened: Yes, I too find it hard to believe.

For some years now, we have had a relationship with the finest art foundry in the country.

The company is called Polich Tallix in Rock Tavern NY, about two hours out of the city, and the owner is Dick Polich.  We have been gold plating, as his sub-contractor, castings that he has produced for some of the world’s renowned artists.

Polich, at 84, is a year older than I, and, thanks to this relationship, we two old farts really hit it off.

One day he calls me and says, “How would you like to gold plate the Oscars.” What was I going to say, “No?” It seems his firm was being considered by the Academy as a new supplier to manufacture the statuette, and he thought we would make a good team

That’s how it started. But here is the back story:

For many years, the present Oscar, was cast in Britannia metal, a fancy name for Tin. But the original figure from 1929 was cast in bronze, and when compared to today’s Oscar, the loss of detail was apparent.

In addition The Academy wanted to return this iconic figure to its original manifestation; that of a true art object.

Polich Tallix had made the short list of potential foundry suppliers that the Academy was seeking and after the Managing Director of the academy came East to visit their facility, he knew he had found his new fabricator.

Then he and Dick Polich made a side trip to Brooklyn to visit, in the words of Dick Polich, “The only plater we ever use.”

Of course I touted our Laser Gold. Its hardness would give them the durability for a lifetime of handling and  I began to regale him with tales of our work with NASA and what a great story this would be.

“The ancient art of bronze casting technique, paired with a space-age process used on the James Webb telescope and “Messenger”, the mission to the planet Mercury, among others.”

He said he would welcome Laser Gold’s uniqueness as a 24 karat gold that is three times harder than anyone else’s pure gold but he seemed a little uneasy with our space and defense connections.

“in Brooklyn.”  It seems that Brooklyn has a special cachet in the rest of the country.

(If some of you have gotten an e-mail from me recently you might have noticed my current signature line, “105 years under the same family management….and we almost have it figured out.”)

They gave us permission to describe what we are doing for our corporate publicity as long as any PR piece was first approved by the Academy.. Our first press release went out today.  You can read it at the end of this blog post.

Earlier this week ABC-TV in New York sent Sandy Kenyon to Brooklyn to interview both me and Dick Polich in my office. Afterward I followed them over to the plating shop where they really had a good time filming Steve Candiloro (JR to most of us) actually plating an Oscar. Mr. Kenyon seemed quite intrigued at the variety of stuff moving through our shop from a gold-plated chalice for a local Monsignor to Pac-3 missile parts for Boeing.

.We will have a link to this video on our web site shortly after it goes live on Thursday (tomorrow) during the 4 pm hour. 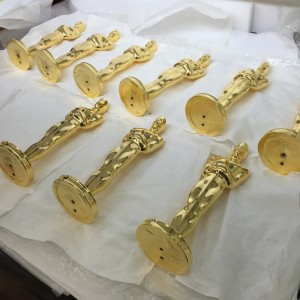 NEW YORK, Feb. 24, 2016 – The Academy of Motion Picture Arts and Sciences is fulfilling the task of returning the world-recognized statuette to its roots as a true art object. Epner Technology has done gold plating on bronze castings for such renowned artists as Mathew Barney and George Condo, and has had a long relationship as a gold plating supplier to Polich Tallix, the art foundry that produced this year’s Oscars. Polich Tallix was able to restore the detail and refinement of the original 1929 Oscar. Epner Technology is able to maintain this detail after “dressing” him in a suite of gold, but not just any gold –Laser Gold.

Epner Technology, founded in 1910, originally developed Laser Gold for Xerox® and later modified the process for NASA Spacecraft. The Oscars chose Epner Technology to help return the Statues to their original art form and legendary luster. Deposited by electroplating, Laser Gold is a pure 24 kt gold that is also three times harder than ordinary pure gold.  “This is the first time that this unique plating process was specified for the Oscars” said David Epner, President, Epner Technology.

Spacecraft, from the earliest GOES weather satellites to the cryogenic cooling systems on the James Webb Space Telescope Cameras, utilize Laser Gold’s ultra-high infrared reflectivity, critical to maintaining thermal control of the on-board instruments by reflecting the sun’s radiant energy back into space. This year’s Oscars will share the same ultra-rich gold and benefit from the durability of Epner Technology’s unique formula.

Hand delivered to Epner’s Brooklyn factory from the foundry, the first step in the process was to polish the raw bronze. Each Oscar was then racked, electro-cleaned, copper plated, bright nickel plated and immediately immersed in the Laser Gold Plating tank. The entire cycle took more than six hours each.