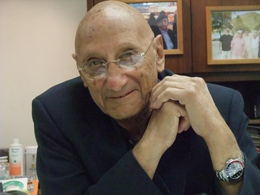 Well it had to happen sooner or later.  Kicking and screaming, I come into the modern world of social networking.  This is what brought it about:

Over the past 50 years, thanks to my choosing the right father, I have been privileged to be involved with countless remarkable people doing countless remarkable things. Many of the projects have ”back stories,” that add an interesting human dimension to a plating project.

This will be the first of many of those “back stories.”

In the mid-1970’s, Cohan-Epner, as we were then known, was a gold plating supplier for Xerox (how this happened is a story in itself).  The “gating” part preventing production of their newest copier was an aluminum extrusion fusing reflector requiring polishing, nickel plating and gold plating for IR reflectivity.  Our test position for the reflectivity measurement was a Beckmann DK2A Spectrophotometer with an integrating sphere that we calibrated with a vapor deposited gold reference mirror from the National Bureau of Standards (NBS).

One day, about three years into our sole source relationship with Xerox, our Quality Manager informed me that our NBS calibration standard had drifted, and based on this conclusion he rejected a week’s production.  “It’s reading 2% low,” he said.  Disbelieving what I had heard, I replied, “You might as well say there is no God!”

In a panic, I arranged to have a recalibration done at NBS in Gaithersburg, MD., and personally watched the mysterious procedure there unfold.  To my amazement, my QC Manager’s measurement was confirmed.  It was then, in the Metrology Lab, that the “feces collided with the air circulator.”  A recall was announced; a rare event indeed!

Obviously, this was not the most opportune to time to suggest our Laser Gold as the replacement for the now “defrocked” evaporated gold standard NBS was offering, but, I was young, and thus had no sensitivity to what an inappropriate suggestion it was at that particular moment. Undaunted, I sent to Victor Weidner, my NBS contact, a 2 inch diameter, diamond fly cut, copper substrate, coated with 0.5 microns of our Laser Gold.  I later learned that he had measured our mirror and promptly stored it away for a year.

When he re-measured a year later (after it had been sufficiently “aged”), he ordered 50 more and it went into The NBS Catalog as Standard Reference Material, #2011. Epner technology co-opted this number as the designation for the Laser Gold Specification, both internally and on customer’s drawings and Epner Technology became the sole and single source for this Standard for more than twenty years!

There is an informative epilogue to this story; look for it in my next blog entry.