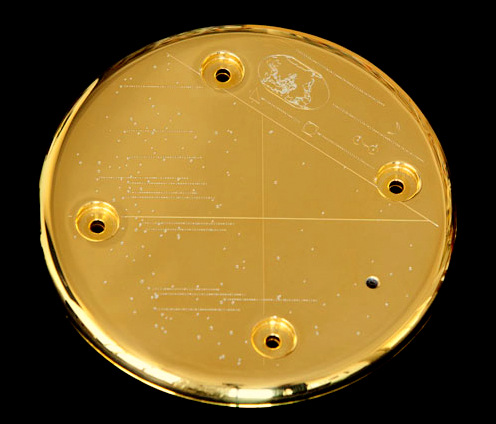 Wow!   Epner lands in the national press twice in one week!  On the heels of our showing up on the cover of the Mcgraw-Hill publication, Aviation Week and Space Technology magazine, a Wall Street Journal writer and I attended the same party.

Ralph Gardner is the author of a Wall Street Journal column, that comments on the New York scene entitled, “The Urban Gardner”  A recent column he wrote was about a party for an artist, Trevor Paglen, that we both attended in Bryant Park behind the New York Public Library.

Some background: Trevor came to our office in Brooklyn with a project some months ago that I thought was really “off-the-wall”.

He wanted us to fabricate and Laser Gold plate an eight-inch diameter “time capsule” and since the “artifact” was to be put into orbit on an EchoStar XVI satellite, he was ecstatic when I told him that Laser Gold has been on almost every space mission since Voyager. (The launch-rocket company, Loral, was insistent on a “space qualified” coating for anything in or on its vehicle. Laser Gold solved that problem.)

Paglen’s whole idea is that space travelers (from another planet?) far into the future would come upon this orbiting gold case and find inside a silicon disc onto which has been “nano-etched” some one hundred photographs of life on earth. The project, Trevor’s brainchild, is entitled, “The Last  Pictures.”

The aforementioned party, put together by Creative Time (www.creativetime.org) an art support organization, with participation from the New York Public Library, was held at twilight on a lovely New York day.

In Mr. Gardner’™s WSJ article he politely pointed out “the hyper-crapshoot aspects’ of Mr. Paglen” enterprise.”  Elsewhere in his article he referred to the  housing that we machined out of 6061 aluminum alloy, polished, plated with electroless nickel and finally a micron of Laser Gold, as a “handsome gold plated shell.”

Some 500 people attended the outdoor event with interesting repartee between Paglen and Werner Hertzog, the film maker, which took place in front of a large screen that showed some of the photos as they were discussed.

I was delighted to be among the eighty or so people that were invited to a dinner at The Lamb’s Club following the photo discussion.  That dinner could be the subject of another blog.

This whole experience took me back 50 years to the day the renowned wire sculptor Richard Lippold showed up at our shop, at that time on the 7th floor of a factory loft building in Greenwich Village.  He arrived saying he needed Cohan-Epner, our company’s name for its first 75 years, to gold plate 100,000 feet of  fine stainless steel cable.  I was incredulous until the man explained that he had just completed the large lobby sculpture at Lincoln Center’™s Philharmonic Hall. Having just read a Profile about the artist and this work in the New Yorker magazine, I asked if he was indeed Richard Lippold.

After confirming his identity, Mr. Lippold dropped the other shoe” he needed the cable delivered in three weeks so that he could install it in time for the opening of the Jesse Jones Hall, Houston’s “Lincoln Center.”

I replied,”That’s not going to happen”. But what convinced me to jump thru hoops to accomplish this impossible delivery was his utterance of the five magic words every small businessman waits for: “Tell me what it takes.”

We made the deadline, the Jones Hall opened on schedule and when Lippold returned to NY he delivered an unusual gift to thank us for our effort.  It was a bottle of wine.  A Mouton-Rothschild ’59!, It was a renowned label because Baron Phillip de Rothschild had some of the world’s most famous artists design the label for each year’s vintage. The ’59 Mouton was considered one of the best years for a Claret ever, had a label designed by Lippold! I still have the autographed bottle, the wine long since enjoyed.

That was the beginning of a long and interesting collaboration with Lippold who died some ten years ago.  The collaboration continues with his Foundation as we discuss the restoration via plating with Laser Gold, of his breathtaking work, “The Sun,” which hung in the Met and later, from 1976 to 1984, in the Smithsonian Air and Space Museum.

From that beginning in 1962, work by a broad spectrum of American artists have passed thru Epner Technology’s plating tanks.  Famous names like Jeff Koons, Mathew Barney and Jose Di Rivera and countless lesser know artists, have occasionaly permitted me to share a bit of the creative process as I suggest finishes and capabilities that they may not have heard of. This vicarious participation and interaction with, often some very interesting people, has been it’s own reward. 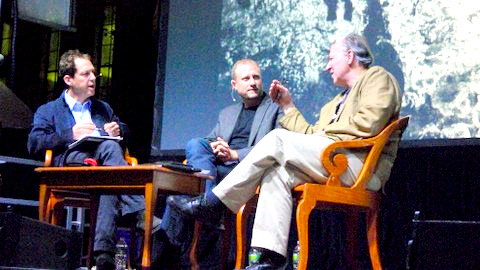 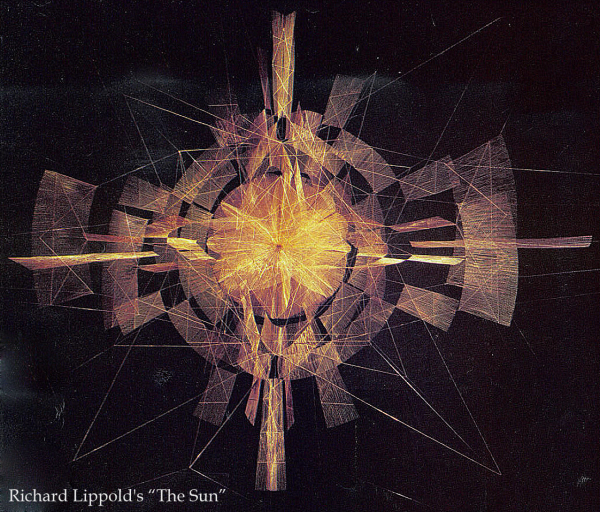