It is called the International Gold Symposium and is held annually in Lima, Peru.  Thanks to my relationship with former head of the World Gold Council in London, Richard Holliday,  my name was put in as a panel member to discuss “Gold as it Affects Humanity.”

It seems this was essentially a mining crowd, with nearly a thousand attendees, and they primarily related to gold for jewelry or investment.  Even at an event organized by the Gold Council you run into people who aren’t aware of, or have little interest in how gold affects humanity, so I put together a Presentation that illustrated the application of Laser Gold’s peerless infrared reflective efficiency on a myriad of products.

I included pictures of the Hubble telescope hardware and a reflector for GE’s latest baby incubator design, all plated in Epner Technology’s standard setting Laser Gold. I included photos of an ear thermometer light pipe contrasted to an automotive paint drying reflector system, both of which we plated with Laser Gold.  A semiconductor process machine, called an epitaxial reactor, was followed by a series of infrared jammers that protect our aircraft from heat-seeking missiles.

As I demonstrated in my presentation, gold is used in multiple markets from industry and aerospace to defense and health.  And for these reasons, gold has an impact on humanity: safety, well being and advancement, as do those who work with gold. 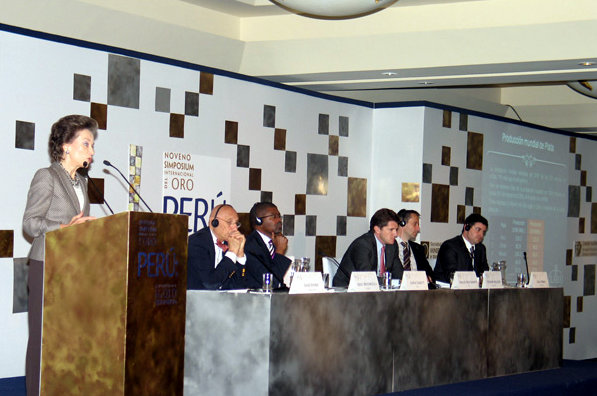 Here’s the wild part! The airline ticket they sent me cost more than 6K! The event was held at a five-star hotel and they paid for four nights.

All that for my allotted presentation time of 20 minutes!

After some nice words about my presentation, the head guy asked me if there was anything I wanted to see. My immediate response was, “Can I get a tour of a mine?” He disappeared for a few minutes and when he returned said, “Your driver will pick you up tomorrow morning at 8:30. The mine is about an hour drive away and your guide will be the production manager.”

The drive was uninteresting through desert-like terrain, most of the time along the Pacific Ocean.  When we arrived at the mine, they dressed me up in a mining outfit and in a pickup truck we headed into the side of a mountain still essentially at sea level.  The tunnel we were driving in (see photo) descended until we were some 400 feet below sea level.

It was a seemingly endless labyrinth of tunnels and even my driver needed a lead truck. He explained that one shift drilled the mine face and placed the explosive charge which was detonated at the end of a 12 hour shift. Meanwhile low headroom front loaders moved the ore chunks from the previous shift’s explosion into waiting dump trucks that transported the ore to the crushers outside. There is less than 3% copper at this stage. 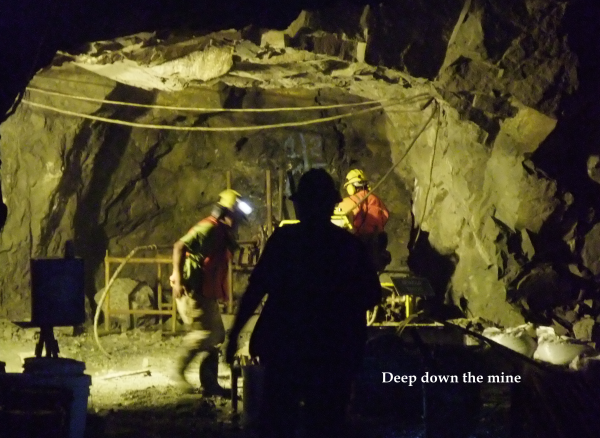 Another drilling operation was going on continuously, but not for planting explosives. This operation was strictly for extracting core samples, one and a half inch diameter and about four feet long, that were analyzed in their lab to determine the next drilling site (see photo).

When we came out of the mine my tour continued past huge rock crushers and then past slurry bath concentrators that brought the copper level up to near 30%. This was dried and loaded into trucks and incredibly sent out of the country for smelting into the familiar red metal.