I have recently returned from the Eleventh Optatec trade show in Frankfurt, Germany.  It was the third show in as many months and it triggered a pervasive question: Are they worth it? 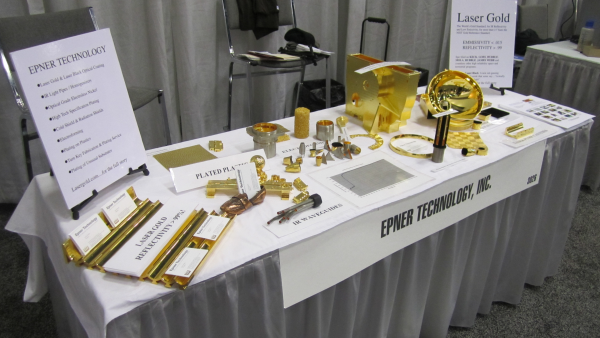 In spite of the fact that we always take the smallest space, the costs of travel, hotel, car, etc. begin to add up. My standard wisecrack when asked after 40 years of doing these shows is the title of this piece, “If I don’t show up, they’ll think I died”.

But the real reason we continue to do them is that the benefits outweigh the cost.

Indeed, Epner Technology owes its very existence today thanks to a chance meeting with a Xerox draftsman at our very first trade show exhibit in the Design Engineering Show at McCormick Place in Chicago 40 years ago!  Our display consisted of jewelry items, giftware “tchochkies” and other novelties with just a few pieces of gold plated aluminum representing the so-called high-tech end of our business.

The glitter on our table attracted the Xerox guy long enough for one of the aluminum parts to catch his eye. He said that Xerox was having a problem with the blistering of nickel and gold plating on a part called the “fusing reflector”; a 16 inch aluminum extrusion (see photo below). 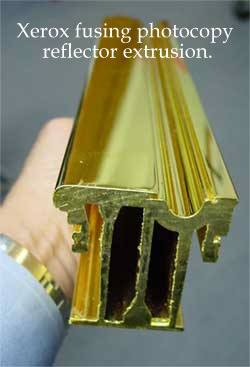 Epner Technology was the sole source supplier of these reflectors during the ten year life of “radiant fusing technology”…more than one million shipped.

He revealed that this reflector was the “pacing” item on a new line of copier, and wrote a name on the back of his card and said, “Call this guy. He needs this capability” The name he gave me was the Program Manager on what would become the largest selling copier in Xerox history.

I left the booth in the hands of a colleague and flew directly to Rochester to meet with the manager whose name he had given me.   I was handed an extruded sample reflector to plate. The spec was: Polish (buff) the reflecting surfaces, bright nickel plate followed by a bright, pure gold, 0.25 microns thick.  Bake at 500 degrees F for one hour!

I returned a week later and proudly presented the part. I was ushered into a darkened room with four engineers. They mounted the extrusion in a holder on the side of a machine I had never seen before but the marking read, Beckman DK 2A. This I learned was a spectrophotometer with an integrating sphere and thus could measure the total reflective efficiency. Specular combined with diffuse. They were measuring at a wavelength of 700 nm, and the reflectivity came up on the digital readout at 94%.  Their jaws dropped. They tried not to look impressed, but they failed. I too, could hardly hide my excitement at their excitement even though I didn’t know what I was looking at.

They sent me back to New York with 20 more samples, but I could have flown without a plane. Two weeks later, we repeated the routine. Only this time the reflectivity barely reached 91%!  The lead engineer freaked. He said, “I put you on the drawing at 91% to give you a 3% cushion. Now I’ve got to drop it to 88%” What happened to the 94%?”  I tap-danced.  I didn’t know how we got 94% in the first place, but I assured him that we would maintain the 91% and surely get back to the higher reflectivity as “soon as our lab figured it out.”

More importantly parts didn’t blister in the heat test so we were off and running with a 500 piece pre-production order.

I rented a U-haul and personally drove the 7 hours to Webster N.Y., just outside of Rochester with the first 250 examples of the most beautiful gold plating we had ever done. They were all rejected for low reflectivity! It was evident that the human eye made a very poor IR spectrophotometer. Indeed, in the infrared, gold is not gold, is not gold.

It was clear that if we didn’t have the same measuring instrument that Xerox used, the game was over. They agreed and tooled us with the identical set-up at a cost of 60K! (Talk about desperate) With the new “eyes” that our in-house Beckman gave us, we were slowly able to again achieve 94% at 700nm. 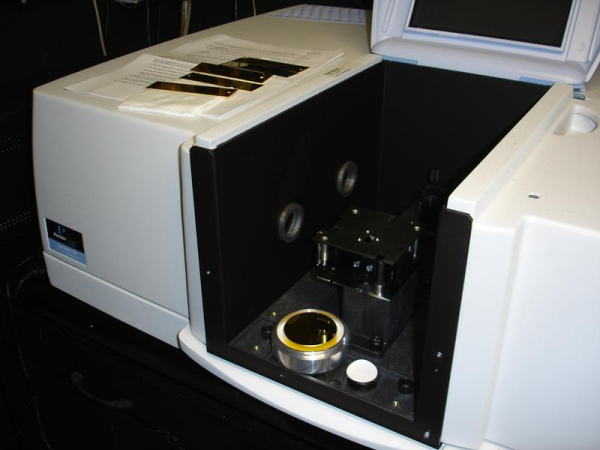 Today, we guarantee a  reflectivity of 97% at 700nm and it goes even higher further out in the IR  After increasing the hardness to over 200 Knoop, we dubbed it “Laser Gold” and this process is the raison d’Ãªtre of this 100 year-old plating company.