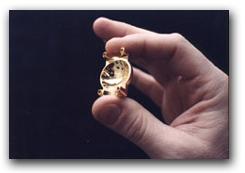 Originally a replicated optic, in 1975, Epner Technology engineers suggested a radical approach to achieving a dramatic cost reduction; i.e. polish the die insert to improve the as cast quality, then buff the spherical surface followed by nickel and Laser Gold plate directly on the casting. This was such a success that it generated a value engineering cost reduction worth more than 4 million dollars over the life of the program.

Epner Technology was named sole and single source for the remaining life of this missile. What started out as a research project for cost reduction, grew to 750,000 units over some 25 years.

This project was a turning point in Epner’s history as it was the first time the company had taken on the total manufacturing responsibility. They procured the raw casting from Greenfield Industries, then machined and plated in house.

A helium-neon laser beam was impinged upon the rotating mirror while it was moved in an arc of 90°. A detector receives the reflected beam of the laser and any flaw on the surface scatters the beam and the “reject” light is lit. Each mirror was inspected on this customer-supplied unique inspection tool.

“The performance of the Epner sample was outstanding, providing a Q of approximately 3700 as opposed to the best previous value of 3200 (typical production values are around 2800).”