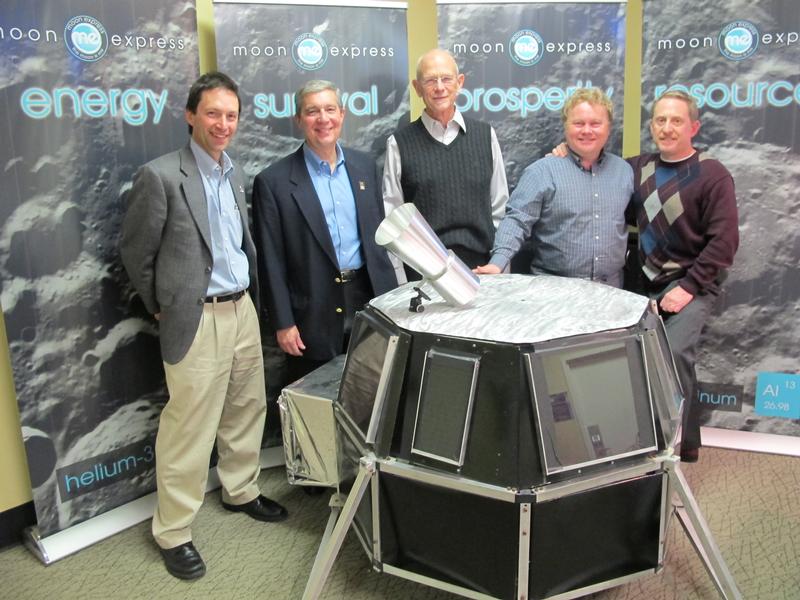 The “Lunar Laser Ranging Retroreflector Array for the 21st Century” (LLRRA-21) is an experiment developed at the University of Maryland within the LUNAR Consortium at the University of Colorado. A full-size model of the LLRRA-21 is shown at approximately the expected position on the upper instrument deck of the model of the Moon Express which will carry it to the moon within the next two years. The MoonEx1 lunar lander is being developed by the Moon Express Team, competing for the Google Lunar X Prize. The LLRRA-21 will improve the accuracy of our knowledge of the Lunar Physics and General Relativity by a factor of 10 to 100. This improvement is beyond the current performance of the Apollo retroreflector arrays, also led by the University of Maryland, which have provided many of the best tests of General Relativity and provided new discovery of the inner physics of the moon (the discovery of a liquid core).

Behind the model are from left to right: Joe Lazio, Deputy Director of the Lunar University Network for Astrophysics Research (LUNAR), a team of the NASA Lunar Science Institute, Jack Burn, PI for the LUNAR Team, Doug Currie of the University of Maryland and Principal Investigator for the LLRRA-21, Bob Richards, CEO for the Moon Express, Alan Stern, Chief Scientist for Moon Express. Moon Express is a team focused on developing a commercial business for transport to the moon and competing for the Google Lunar X Prize.

Epner Technology fabricated the Sun Shade component through an electroforming process. The interior surface was Silver plated to reflect visible light and Laser Gold plated on the exterior to reflect infrared light.