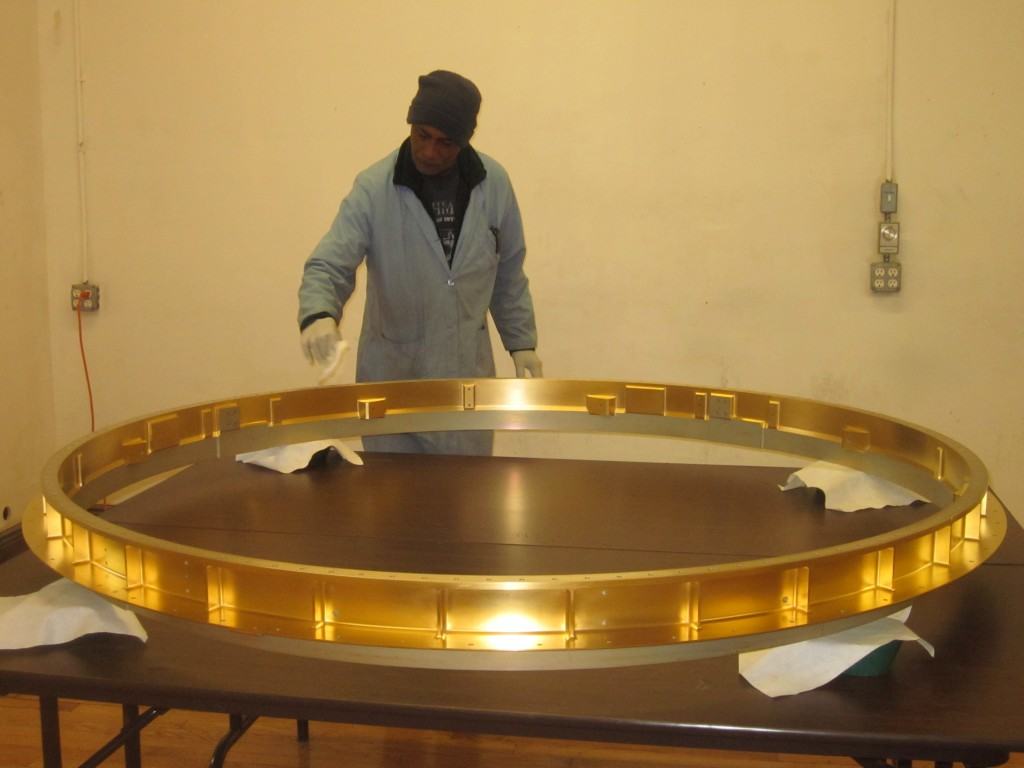 One of Epner Technology’s master platers inspects the MMS structure ring prior to shipping to NASA. Emissivity on a rough machine rings such as this, was less than .05. On a highly polished surface, emissivities below .02 are routinely achieved at Epner technology. This extraordinarily low emissivity capability was instrumental in Laser Gold being specified on 16 foot long stainless tubes that carry helium at a temperature of 6° Kelvin to cool the James Webb Space Telescope’s camera. 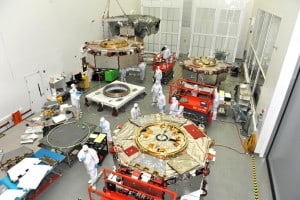 NASA specified Laser Gold as the low emissivity coating for four 2 meter diameter aluminum structure rings for the MMS mission. The ring is clearly visible in the first photo of the “stack” buildup of the four satellites to be carried aloft on this spacecraft. The rings were machined utilizing the large part capability of one of the most renowned machine shops in the country; Bechdon Machine in Maryland.

The completed stack ready for launch.

“The purpose of the Magnetospheric MultiScale Mission is to discover the fundamental processes that allow charged particle and wave energy emanating from the Sun to penetrate the magnetic bubble that surrounds and protects the Earth from constant “Solar Wind” bombardment.  Four identically instrumented satellites will orbit through regions of near-Earth space where this solar penetration occurs, and will measure the properties of space in those regions where this wind “blows” at speeds of more than 100 kilometers, or 62 miles, per second.  These four satellites will fly in a pyramid-like formation in order to allow scientists to determine the speed and three-dimensional structures responsible for penetrating this protective bubble.”

“MMS will determine the small-scale basic plasma processes, which transport, accelerate and energize plasmas in thin boundary and current layers – which control the structure and dynamics of the Earth’s magnetosphere.  MMS will pave the way for future Constellation-type missions (Southwest Research Institute).”

NASA’s Goddard Space Flight Center is managing the MMS mission, with a number of contributing working groups, such as Southwest Research Institute, Lockheed Martin, UCLA and UC Berkeley, among others.  As one NASA program manager put it, “NASA is flying the bus, and the other instruments are the kids.”

Epner’s contribution to the MMS process proved to be critical.  Epner’s undertaking was to coat the “heart” of the Electrostatic analyzer, which filters out electron particles, specifically with Laser Black, which in the end met and even exceeded initial expectations by the MMS project team.  For more information on this fascinating project, click on the link below.