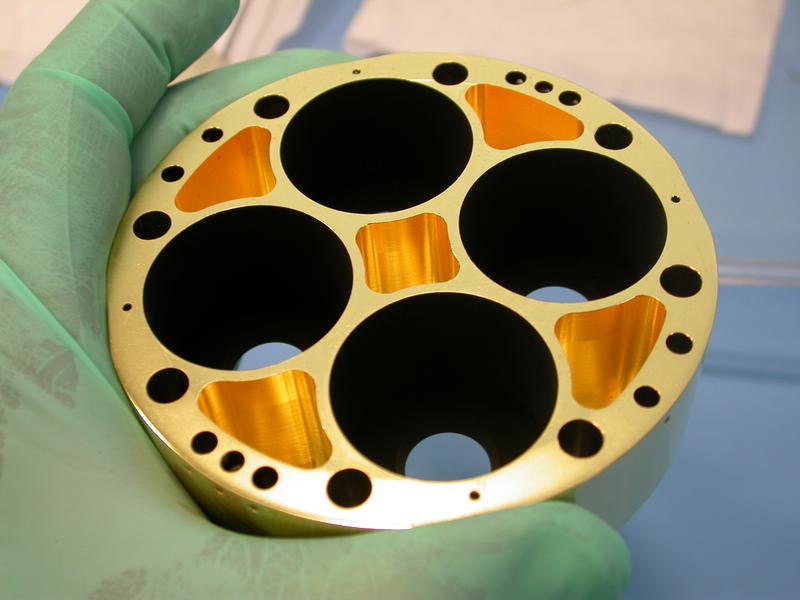 Epner Technology recently plated a critical component (right) utilizing both Laser Gold and Laser Black processes on an instrument for the National Polar Orbiting Operational Environmental Satellite System (NPOESS) under the Total Solar and Spectral Irradiance Sensor (TSIS) program. The program rebuilt the instrument (TIM) used for the GLORY mission three years ago, as well as the original build of the instrument on SORCE mission ten years ago.

The Solar Radiation and Climate Experiment (SORCE) is a NASA-sponsored satellite mission that is providing state-of-the-art measurements of incoming x-ray, ultraviolet, visible, near-infrared, and total solar radiation. The measurements provided by SORCE specifically address long-term climate change, natural variability and enhanced climate prediction, and atmospheric ozone and UV-B radiation. These measurements are critical to studies of the Sun; its effect on our Earth system; and its influence on humankind.

The SORCE spacecraft was launched on January 25, 2003 on a Pegasus XL launch vehicle to provide NASA’s Earth Science Enterprise (ESE) with precise measurements of solar radiation. It launched into a 645 km, 40 degree orbit and is operated by the Laboratory for Atmospheric and Space Physics (LASP) at the University of Colorado (CU) in Boulder, Colorado, USA. It will continue the precise measurements of total solar irradiance (TSI) that began with the ERB instrument in 1979 and has continued to the present with the ACRIM series of measurements. SORCE will also provide the measurements of the solar spectral irradiance from 1nm to 2000nm, accounting for 95% of the spectral contribution to TSI.

"Not only was the Laser Gold plating and masking on this critical component flawless, but it was delivered on time against an 'impossible' schedule."
-Roger L. Counts, Keith A. Corsi, NASA-Goddard

"The plating job was head and shoulders above what has been done for aircraft instruments here in the past...the performance of the vessels gave us nearly double the sensitivity, due in part to the extremely high reflectivity of your finish..."
-Dr. Thomas B. Reyerson, National Oceanic and Atmospheric Admin.

"Your Contribution has been invaluable and we could not have accomplished our goal without you."
-Stephen Hixson, Northrup-Grumman

"The quality of the Laser Gold coating was incomparable, but indeed that is what we have come to expect from Epner Technology over the years."
--Frank Groark, TRW Space & Technology Division